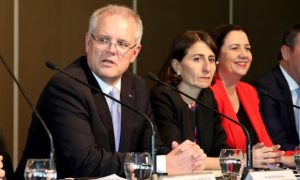 Population growth dominated Scott Morrison’s first meeting with state and territory leaders, causing smiles around the Council of Australian Governments (Coag) table but not in the way the prime minister might have imagined.

The Australian Prime Minister Mr. Morrison attended his first Coag as leader wanting to gain the states’ co-operation in reducing the  Australia’s migration rate and putting in more controls for where migrants would be allowed to settle.

The federal government, in response to growing voter frustration with congestion and infrastructure strain in Sydney and Melbourne, has proposed cutting Australia’s migration cap from 190,000 to 160,000. Just under 162,5000 people were accepted in Australia in the past year, under the current regime.

“It has to be maintained, if not increased. That’s what I got out of the presentation.”

The ACT chief minister, Andrew Barr, also made a point of making “a clear statement of values that we think it is very important that Australia maintain a strong migration program”.

“This is very significant for the social, cultural and economic development of our nation,” he said. “And for many jurisdictions around the country. There is a need for increased population to drive economic activity but also to diversify the social and cultural base.

Therefore, The next migration cap likely to remain largely unchanged in the coming budget in April.

But the issue has effectively been kicked down the road, with the next migration cap likely to remain largely unchanged in the coming April budget.

But, the rate of that growth remained fraught.

“It’s very clear now that we have a very different approach to issues regarding population state by state,” the South Australian premier, Steven Marshall, said. “There is no cookie-cutter approach. What we can do now is all work collaboratively towards a good strategy, a positive strategy which is going to ensure that we get population growth exactly where it’s needed in Australia going forward.”

The nuts and bolts of exactly how a new migration cap would work, and where those migrants may be sent, will form part of the next treasurers’ meeting.

But after several combative and hostile Coag meetings, led by disagreements over GST distribution which were finally resolved, the message from the nation’s leaders was cautiously optimistic at the conclusion of their December meeting.

“The progress made today was quite outstanding in terms of the number of issues that were covered,” Berejiklian said. “And all of our citizens in each of our jurisdictions will feel served by the agenda and the conclusions we’ve reached today from a very comprehensive agenda.

Issues surrounding national security and the drought were met with consensus, as was Queensland’s push for the “right to be forgotten” online for victims of cyber-bullying.

Morrison has agreed to take it up at at commonwealth level, provided it did not interfere with the work of security agencies.

“We need to make sure, as we do this, we do not provide a loophole for those who might be engaged in all sorts of nefarious activities,” Morrison said, adding he would be furthering the talks at a later time.

The next time the state and territory leaders meet will be after the next federal election, in July, when it will be hosted by Queensland.