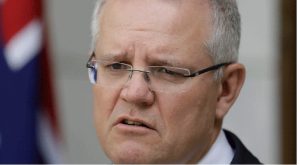 Australia has abstained from voting as the UN General Assembly endorsed a sweeping accord to ensure safe and orderly migration.

The Global Compact for Migration is the first international document dealing with the issue, though it’s not legally binding. It was endorsed overnight by a 152-5 vote.

The five countries that voted “no” on the compact were the United States, Hungary, the Czech Republic, Israel and Poland.

Scott Morrison has refused to sign the agreement which Australia helped draft.

The vote in favour of the resolution was lower than the 164 countries that approved the agreement by acclamation at a conference in Marrakech, Morocco, earlier this month.

Prime Minister Scott Morrison had refused to sign the agreement which Australia had helped draft.

Australian officials have been heavily active in negotiating the wording of the UN Global Compact on Migrant over the past two years.

But the prime minister said the UN pact would compromise Australia’s border security and immigration settings.

“It doesn’t distinguish between those who illegally enter Australia and those who come the right way,” he said on November 21.

“I would never allow something to compromise our borders, I worked too hard to ensure that we weren’t in that position.”

Five countries voted no on the compact including the US.

The agreement is supposed to support safe, orderly and regular migration.

Mr Morrison argues the government has already achieved these goals.

Some countries have voiced scepticism over the eventual goals of the agreement.

The US has rejected it, calling it an effort to advance global governance at the expense of the national laws and interests of states.